Here's a shortened version of the movie I made a couple of years ago about the Bungokho Rural Development Centre in Mbale, Uganda. 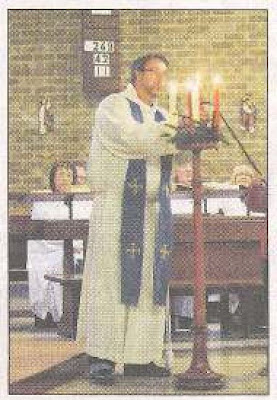 I got my face in the newspaper again this week. Call me a relentless self-publicist if you like! On this occasion it was an Advent Carol Service which we put on to co-incide with the turning on of the North End Christmas Lights. I wanted to show that the church is not anti-trade. We want shops and businesses to thrive. (I need to go shopping too, you know!). However, through the Carol Service, I hoped to encourage people to remember the underlying importance of the Christmas story.

It was a fairly unremarkable news item. The headline "Vicar leads Service" is hardly going to get the international news-wires in a flap! But that's the great thing about a local newspaper. A good one can help churches and community organisations to get their message out.

Anyway, here's a rather low-res version of the photo of me lighting some candles!

Posted by Tom Kennar at 8:11 AM No comments:

Update on the Travellers Saga

I promised to let you know what response yesterday's complaint to the news might have brought forth. I'm delighted to report that I received an apology today from the New's Deputy Editor - explaining that my original letter had been passed for publication, but lost for a while on a sub-editor's desk. The original letter (albeit somewhat edited) was published today. Good for The News...balance at last.
Posted by Tom Kennar at 3:34 PM No comments:

Travellers in Portsmouth - the story continues

Here's the text of a letter I have just written to the Editor of The News (our local newspaper). I'll publish any reply I get from them on this blog. See below my letter for a copy of the letter which got me writing again...

I write to express my dismay that my letter of four days ago (below) was not published (even in edited form) by your newspaper; whereas in today's edition of The News you have seen fit to publish an intolerant rant from from J L Goater of Catherington Way, Leigh Park. I wonder what J L Goater thinks should really happen to Travellers (aside from the silly suggestion of parking them next to MPs homes). Perhaps Mr or Ms Goater would like 'these people' (as he or she described them) rounded up and exterminated? Conversely, my suggestion (of using the former caravan site on the Eastern Road) was intended to make a tolerant, practical, contribution to the issue.

Hitherto I have worked under the assumption that my local Newspaper would be interested in putting over an alternative view about the issue of Travellers. I seem to have been mistaken. Your decision to give publicity to such intollerant racism (for that is exactly what J L Goater has displayed) without offering an alternative viewpoint from a community leader is extremely regretable.

I regret to say that unless I see some balance being reported by you over this important issue, I will be cancelling my subscription to the News, and encouraging the members of the three churches I serve to do the same. I have already published my previous letter to you on part of my own website, which is read by many of my parish members. I will be publishing this letter there too.

I leave the ball in your hands - in the fervent hope that your decision not to provide a balanced story was just an editorial oversight on your part.

Here's the text of the letter from J L Goater that got me so riled:

With regards to the site for travellers story in The News, Nov 13, good for Portsmouth City Council!

Why should any council find spaces for these people? Portsmouth is full up now, just like the rest of the country. But that's another story.

Travellers contribute absolutely nothing to the economy, so why help them?

Although, having said that, I have found the perfect parking area for them. Find out where all our MPs live and park them as near as possible to their private homes. That would soon change their mind about these people.

Posted by Tom Kennar at 9:20 AM No comments:

Here's the latest very short video from animator Steve Bodle. This has no sound. It's just for fun!

Posted by Tom Kennar at 1:22 PM No comments:

No Room at the Inn for Travellers

Here is the text of a letter I have sent today to our local newspaper - "The News". It will be interesting to see what reaction it gets!

A society is judged by how it treats those of its weaker members, is it not? I was therefore somewhat dismayed to read in Thursday's News that the City Council has decided that we do not have space for Travellers in our City.

If the question is one of space, I suggest that the derelict former Caravan Site, on the Eastern Road (next to the Harvester Restaurant) might be considered. It is distant from private housing, yet close to a school (Admiral Lord Nelson), and only a mile from the shops and junior school on Copnor Road. It was once used by Travellers, infact. But after their eviction, the entrance to the site was blocked with concrete, so that they could never return. It has been unused for about a decade.

I suspect, however, that the question is not about space. It feels like a political decision, taken by politicians who are fearful of an electorate who dismiss Travellers without a second thought. However, I want to suggest that Travellers have a long and proud tradition - which has much to offer to the rest of us. Yes, of course, there are some members of their community whose behaviour is less than desirable. But, as we all know, there are some members of the 'normal', house-living members of the general Portsmouth community whose behaviour is no better. Are we really going to say 'no room at the inn' to a whole group of people, just because some of their number misbehave? That's a dangerous precedent. Are we really saying to the innocent children of Traveller families that they are not welcome in our City? Shades of Bethlehem again.

Hearing how our politicians want to ban Travellers from our City, I was uncomfortably reminded of the action of certain totalitarian states of the past who declared "we don't want Jews, or black-people (or basically anyone who is not like us) to live here." I sincerely hope that you mis-quoted Gerald Vernon Jackson when you reported him as saying "we don't want traveller sites".

Travellers have many things to to teach our community - for example about the benefits of living a life that is not tied to a few clay bricks and some cement. In our current economic crisis, some of the people in my own parish are beginning to wish that they have not spent so much time, effort and money in 'building up treasure on earth'. Travellers also have an innate and vital sense of community, which some of our own 'normal' streets lack. I wonder, for example, how many of your paper's readers know the name of their next door neighbour...or the neighbour two doors away? Traveller communities know one another, and support one another, in a way that the rest of us only dream about.

I therefore urge the City Council to think again about how Travellers could be welcomed, and given a chance to contribute to our community, by giving them space and amenities on our Island. Unless we offer such people the chance to put down roots, to pay taxes and have their children schooled, they will always be forced to live on the edge of society. Do we really want to exclude a whole group of people, with their unique and precious history, from among us.

Who will be next I wonder?

One of the members of St Mark's, Steve Bodle, is a professional animator. He works mainly on computer games - making the figures move about at the behest of the game-player. It's all a mystery to me, I must confess.

However, he had an idle moment a couple of days ago, and decided for reasons unknown to draw a cartoon of his Vicar...me. I quite like it...mainly because if makes me look substantially thinner than I am in reality.

Here it is...see what you think! 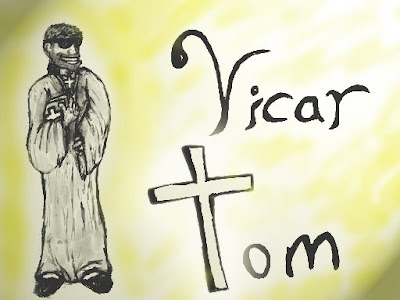